Christian Angerer has been in the media business since 1985. His passion is cinematic photography, especially in black and white. With his companies he works for national and international clients. He has received numerous awards for his work on the international stage, including ADC and Cannes Lions. 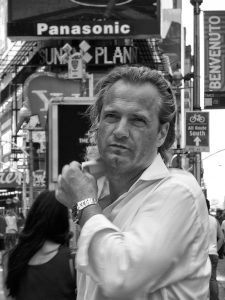 How do you prepare your cinematic shoots?

Similar to a movie shoot. Just adjusted accordingly. Scribbles of settings. The set is a stage – whether built or natural – and it is here that the actor must feel comfortable and be able to come out of his shell. Every shoot is based on a concept. It is classic storytelling.
In a feature film, thousands of individual images tell a story. And that is the task. A photograph has to be just like a movie and be able to tell a story in just one (1) frame. This is sometimes much more difficult. And, perhaps most importantly, you need to build, foster and allow a special sphere of trust with whoever you are working with on set. And this sphere must be genuine and reliable.

You really don’t use Photoshop for post production, do you?

As a rule, no. I edit almost all images with light and shadow. For me, the true beauty in women and men is genuineness and authenticity. It is the fine character traits such as mystery, intimacy, movements, moments as well as the emotions and honesty. That’s what I try to find out and work out together with the person I’m photographing. And there is something special in almost every person, a secret.

Do you also find wrinkles and signs of aging beautiful?

Show courage of character, be real women and real men, but please be real. A lot of Instagram pictures today are manipulated via Face App and Co, slick and alienated, a real identity theft. There is an urge to achieve absolute perfection, which cannot be maintained in real life and thus frustrates many people and makes them ill. Personally, I would also find it boring and quite pretentious to rob women and men of their identity in hours of Photoshop beauty surgery.

Your passion is black and white or do you also shoot in color?

Black and white is more intimate for me personally. It gets under the surface. Monochrome also leaves more to the imagination. It is mysterious and expressive. I already have the black-and-white view in the viewfinder, but I shoot the images in color. Sometimes I also develop in color and black and white in parallel, if both are strong or explicitly desired. Often, black and white wins. However, I don’t want to shoot only monochrome. That would deprive me of the wonderful opportunity of not being able to selectively edit the colors present in the black and white image.

It doesn’t matter if it’s Hollywood actors or people like you and me. In your pictures, they all look particularly expressive and authentic.

We advertisers, photographers and directors are often far too superficial in our visual perception. We like to see the fast foreground, the striking, instead of the hidden.
There are so many technically skilled photographers and directors, yet I often miss the storytelling,  the subtle and special in the commercials, TV shows or feature films. For this you need an open, curious, watchful eye. Every day anew.

Are there any tips you can pass on?

People, characters and souls are different and not linear. They move like rivers and that’s what you should get involved with and capture the story that this other person allows you to tell.

I like to photograph a wrinkled, laughing grandma with her toothless husband in a bistro in Paris with a glass of red wine just as much as a Hollywood star or politician, as long as she or he is interesting. But I prefer to photograph women. Women have a lot of advantages over men. On the one hand, they are charming beings who can show more emotions. They are magical, strong, brave and vulnerable at the same time. To come back to your question, if I could choose one person to photograph – probably Jesus.

Because I would be the first to take pictures of Jesus (laughs). To capture this inconceivable benevolence in pictures and to be able to tell a story about it would be a great gift for me.